"What is There?" Recent Works by Justin Baker and Danny Goodwin (with Scheduled Events) Through January 21 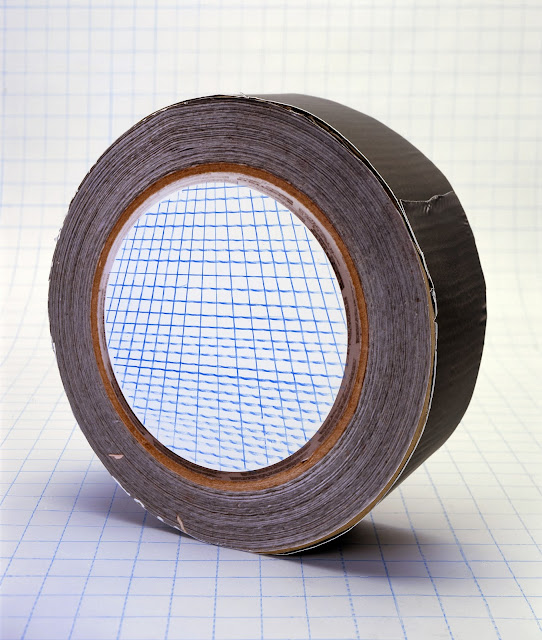 The key OOO difference between “what there is” and “what is there”, is the difference between knowing that there is an object and not knowing it. The first is a statement or conviction, the second is a question. The departure of OOO, as a study and movement, is identifying this difference. It simply states that we know there are spoons, organs, chairs, armies, planets and cocoa-beans: we just don’t know what they are. Our orientation of the thing – “what is there” – hopelessly grasps at them for one reason or another, and yet we never grasp the thing itself – the “what there is.”

Object Oriented Ontology, also known as “Speculative Realism”, occupies a new philosophical position in logical space, attempting to define a set of theses about all that is. According to proponents of “OOO” (as the cool kids dub the doctrine), objects are all that there is. And there are a lot of them. You’re an object; I’m an object; and all the crap between you and me, both living and nonliving, are objects. Under OOO, the conventional hierarchy of living matter vs. nonliving matter is effectively obliterated. Everything—people, potted plants, potholes, porn star posters, rolls of duct tape, and more—is an object that is scattered across the savannah of existence. All are equal and all are on the same plane, ontologically speaking.[1] This “weird realism” (as the founder of OOO, Graham Harmon terms it) is an apt way of thinking about the “stuff” of the Anthropocene. Much of the matter that is carved up into discrete objects, each with its own epistemological and ontological status, will continue to exist in the post-human, weird world of a radically altered climate long after we’ve managed to render ourselves extinct. By training their lenses on the objects and assemblages of the Anthropocene, photographers Justin Baker and Danny Goodwin offer a glimpse into an alternate, speculative reality of the World of Things.

Baker’s still-life images, made with an ancient 8x10” wooden view camera, invites the viewer not only to stare at the arrangements of quotidian ephemera he’s gathered and presented, but to space out, drift off, and dream. In fact, to test the elasticity of that metaphor, his work more precisely resides in the space between waking and dreaming—whether drifting off or coming to. The paradox of coming to grips with something by letting go more completely is laid bare—diagrammed, in fact. Just follow the easy-assembly instructions and add water.

For Goodwin, the object is currency, part of a systematic staging. His photographs translate our believability of objects into an imitation of, or detour into, what we think we see. Hand-constructed environments and objects impersonate their virtual counterparts and reveal the circular logic that undergirds much of the current popular fascination with 3D printing and the “internet of things.” The familiar checkerboard grid of a transparent layer in Photoshop, which is now more a signifier of empty space than actual empty space, represents more than a passive, benign background and in fact, serves as a segue to an interrogation of veracity, photographic or otherwise.

Danny Goodwin is a native Texan, living and working in Albany, NY. His photographic, video and installation work has been seen in numerous solo and group exhibitions at Jack the Pelican Presents, Art Resources Transfer, Ronald Feldman Fine Arts, Momenta Art, and the Brooklyn Museum of Art, all in New York City, as well as the New Art Center in Boston, Massachusetts; California Museum of Photography in Riverside, California; Proposition Gallery in Belfast, Ireland; Washington Project for the Arts in Washington, D. C.; Penn State Altoona, Pennsylvania; Cartel Gallery, London, U.K.; Galerie Sans Titre in Brussels, Belgium; UKS in Oslo, Norway; and Rensselaer Polytechnic Institute in Troy, New York. Goodwin is a 2005 Artists' Fellowship recipient of the New York Foundation for the Arts (NYFA). His publication credits include The Boston Globe, Influence Magazine, Details Magazine, i-D Magazine, Pierogi Press, The Brooklyn Rail, The New York Daily News, The Washington Post, The Seattle Times, The Ft. Worth Star-Telegram and The Albany Times Union. He is Associate Professor of Art and Head of Photography and Related Media in the Department of Art and Art History at the University at Albany, State University of New York.  He has previously taught photography and digital imaging at both Purdue University and the Cooper Union School of Art and received an M.F.A. in Combined Media from Hunter College in 1992 and a B.F.A. in Photography from the School of Art at the University of North Texas in 1989.

[1] Cole, Andrew. Those Obscure Objects of Desire: Andrew Cole on the Uses and Abuses of Object-Oriented Ontology and Speculative Realism, Artforum, Summer 2015, pp. 318-23. 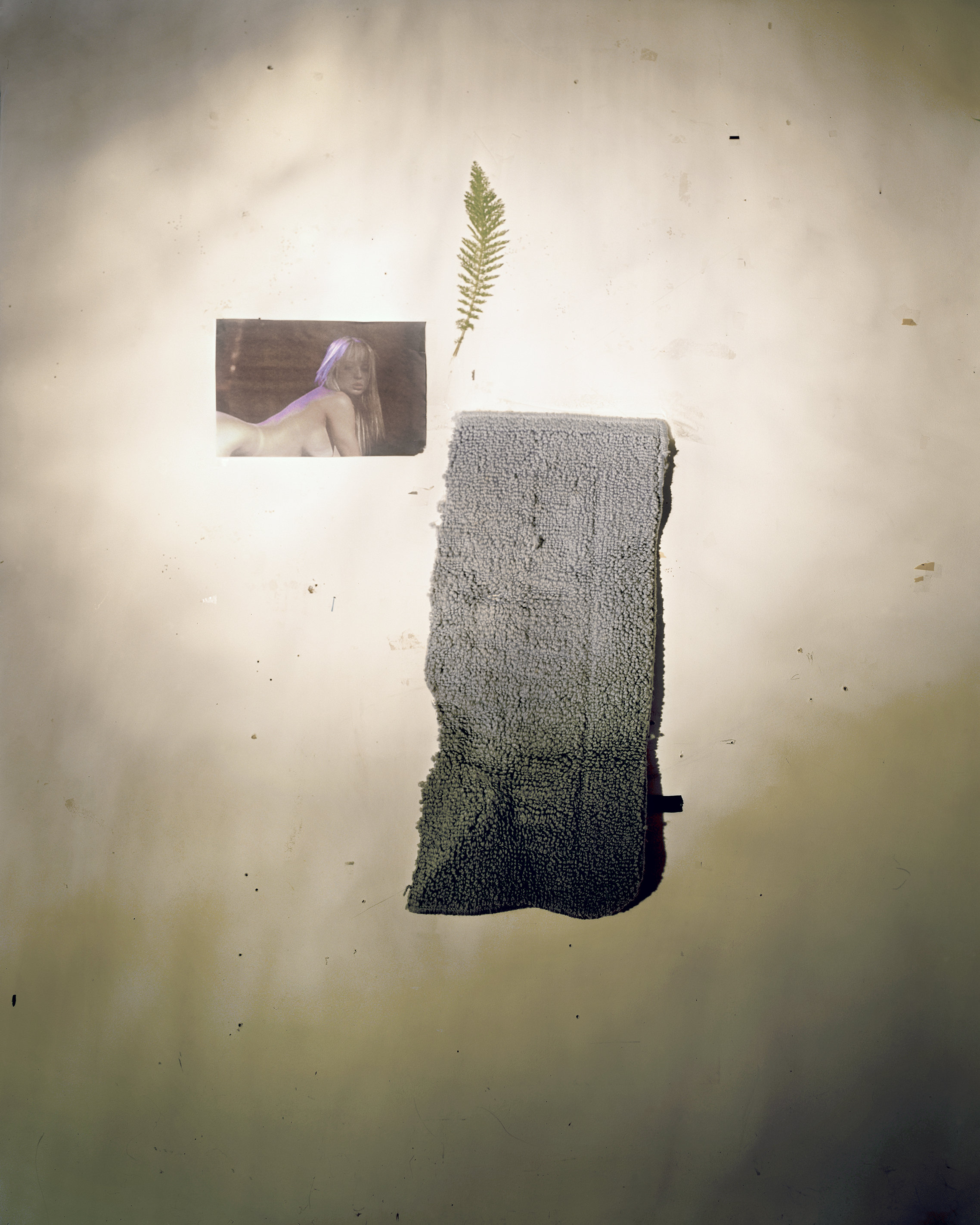 LABspace is located at 2462 NY RT 23 just west of NY RT 22 in Hillsdale, NY. The gallery is open on Saturdays from 11-5. On special occasions we are also opened in the evening for scheduled events as noted. We are also open  by appointment via labspaceart@gmail.com

PLEASE NOTE THAT THE GALLERY WILL BE CLOSED FROM JANUARY 22nd THROUGH EARLY APRIL. PLEASE WATCH FOR ANNOUNCEMENTS.
For further information please contact labspaceart@gmail.com 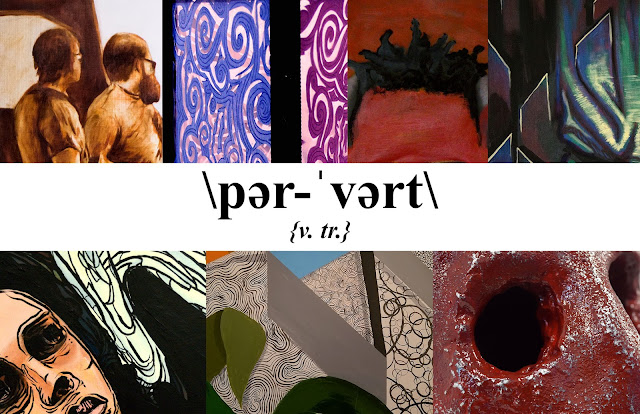 1. Alter something from its original course, meaning or state to a distortion or corruption of what was first intended. Oxford English Dictionary

The verb “to pervert” is the organizing principal around this show. These artists are actively perverting standard uses of materials and subject matter, deteriorating form, playing with contortions of reality, and/or creating interdisciplinary, cross-media artwork. A reception will open the show on Friday, December 9th from 6:30-8:00 pm. Gallery Hours are Saturday December 10th from 11-5 and Sunday December 12 from 11-2.
Bugzdale begins with digital photographic self-portraits, which he then transfers to canvas. He works into the canvas with acrylic paint and modeling paste creating areas of pure abstraction alongside areas representation.

Jake Fallat perverts the use of traditional metal casting of busts and  portraiture along with animal organs collected from his day job as a butcher to create metal castes of grotesque imagery.

Kelsey Bzdyk paints on panel to open portals of perception of space and perspective. She creates geometrical grids which separate various imaginary patterns and universes.

Robert Houle asserts there is no such thing as representational art, therefore all art is an abstraction. Using intuitive mark-making he constructs figurative realism from an abstraction that changes focus depending upon scale.

Ariana Schrader-Rank contrasts perceptions using her work with printmaking, drawing, animation and other various media. By integrating dynamic relationships into her process the final outcome is one that is elaborate, yet subtle.

Bettina Martin creates figurative abstractions of the female form that look fragmented, almost like stained glass. Martin,  a tattoo artists by trade, is concerned with the role of women in the tattoo industry and the concept of female body modification.  However this work perverts rather than convert by appropriating the tattooed female figures and classical representations of women, as well as tattoo flash sheets (pre drawn designs for the mainstream use in tattoo shops) and through the use of Photoshop Martin creates a corruption of the classical.

Melissa Flagler paints awkward and clichéd snapshots her moments of voyeurism that encounters of other people’s interactions. Actual happenings, remembered or recorded become her subject, commenting on the quirks of society and actors. Using oil paint, she emphasizes the figures and removes or negates their setting.